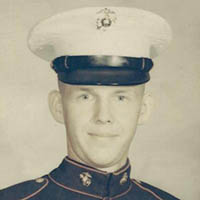 Larry Wayne Johnston, 68, of Cumberland Gap Road, New Castle, departed this life Friday morning, September 11, 2015 at his home in the care of his loving family and hospice. Born in Christiansburg on October 31, 1946, he was a son of the late Thelma Johnston Smith.

Larry was a Christian of the Baptist Faith, a proud veteran of the U S Marine Corps and U S Army, an industrial engineering instructor at Virginia Tech, a member of Newport Lodge AF&AM, a 1965 graduate of Giles High School, and totally devoted to his wife, daughters, and grandchildren. He was preceded in death by his mother and a half-sister Judy Shockley.

He leaves to cherish his memory his beloved and devoted wife of 47 yrs., Vicki Johnston; his daughters “The Johnston Girls” Laurie Johnston Kirk and Trudy Johnston; his grandchildren (to whom he was always a father figure) Amber Kyle Kirk, Cody Hayes Collins, and Breanna Kyle Huffman, his half-brother David Kingrea; his half-sisters Anita Cone, Brenda Kingrea, and Carolyn Kingrea.

Funeral services will be conducted Tuesday, September 15, 2015 at 11:00 am in the Kendall Funeral Home, 605 Snidow St., Pembroke with Pastor Eddie Kendall officiating. Burial will follow in the Williams Cemetery in Craig County. The family will receive friends at the funeral home Monday evening from 6 until 8 pm. Online condolences may be sent by visiting kendallfuneralhome.com.