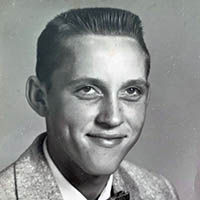 Kerner Ray “Larry” Johnston, age 79, passed away on Friday, October 2, 2020, at the Carilion Giles Community Hospital in Pearisburg, VA. Born April 1, 1941, in Princeton, WV, he was the son of the late L.K. “Bill” Johnston, Jr. and Roena Frances Cheatwood Johnston.

Larry worked as a mechanical engineer in the aerospace division of Bendix Corporation, which was a subsidiary of NASA Apollo Space Missions. He finished his career at TVA, overseeing the construction of a nuclear power plant in Scottsboro, AL.

In keeping with Larry’s wishes, he will be cremated. A memorial service will be held at a later date. Online guestbook can be signed or condolences may be sent to the family at www.broyles-shrewsbury.com. Arrangements by Broyles-Shrewsbury Funeral Home, Peterstown, WV.