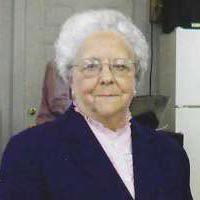 Mrs. Johnston is survived by her Grandchildren: Ernie Caldwell and wife, Becky of Salem and Chris Caldwell and wife, Stephanie of Radford. She is also survived by her Great-Grandchildren: Clay Caldwell, Madison Caldwell, and soon to be Colton Caldwell. Sister and Brother-In-Law, Alice S.Hamblin and husband, R.B. of Pembroke and Sister-In-Law, Susie S. Sadler also survive.

Kendall Funeral Home in Pembroke will be serving the Johnston family. Online condolences may be sent by visiting kendallfuneralhome.com