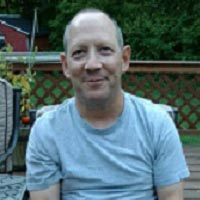 Robert Leon Johnson, 59, of Pearisburg, VA. went to be with the Lord on Sunday, February 23, 2020 after a long battle with cancer. Robert was born on October 25, 1960 in Duluth, MN, and was a son of the Frances Kolo Boyd and the late Robert Warren Johnson.

Robert grew up in a military family, graduated high school in England and joined the U.S. Army serving four years. He received his associates degree in Maine where he lived for twenty seven years. In 2010 he moved to Virginia where he was employed by Carilion as an IT Tech. He met the love of his life, Carol and they married in 2015.

Everyone that Robert met, he befriended and left an unforgettable impression. He used his wit and humor to uplift and encourage those around him until the end of his life. He attended Johnston Chapel Baptist Church in Princeton. He was a strong believer in the Lord and shared his faith with many.

A celebration of Life will be held Thursday, February 27, 2020 at 7pm at the Givens Funeral Chapel in Pearisburg with Pastor Jim Simmons officiating. The family will receive friends one hour before the service from 6 – 7 pm.

The family would like to thank the Carilion Giles Community Hospital employees, our friends at Giles Family Practice, Blueridge Cancer Care, and Carilion Hospice.

In lieu of flowers, donations may be made to St. Jude’s Children’s Hospital or to Cancer Kids and Christmas, c/o Travis Sparks.