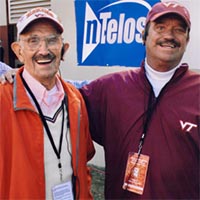 He retired after 40 years at Federal Mogul. He was also employed for 30 years in the Virginia Tech Athletic Department.

A memorial service will be conducted on Sunday, October 6, 2019 at 7 p.m. at New Hope Church of God with Pastor T. Michael Bond officiating. The family will receive friends from 5-7 p.m. Sunday evening prior to the service at the church.