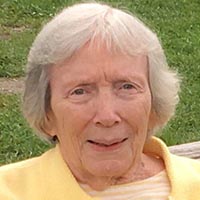 Harriet Hancock Farrier Johnson, age 89, a resident of Blacksburg, Va. for most of her life, passed away on Sunday, September 6, 2020, in York, Pa. Harriet was born on October 6, 1930, in Winchester, Ky., to the late Dr. Paul Henry Farrier and Virginia (Hancock) Farrier.

The family moved to Blacksburg, Va. in 1936. She graduated from Blacksburg High School with the class of 1948. Harriet went to Randolph Macon Women’s College for two years and then transferred to Virginia Tech. She was a member of the Phi Sigma Biological Society. Harriet received her Bachelor of Science degree from Virginia Tech in 1952 in General Science. She furthered her education by attending graduate-study level classes in biology at the University of Virginia and also worked at the University of Virginia Hospital as an electroencephalographic technician. Harriet started her teaching career at the Holton Arms School in Washington D.C. After teaching, she returned to Blacksburg and earned her Master of Science degree from Virginia Tech in Mathematics in 1967.

Harriet was a member of the Pi Mu Epsilon Fraternity National Honorary Mathematics Society. After continuing further course work at Virginia Tech in mathematics, she taught for a semester at the College of William and Mary in 1969. While she was at Virginia Tech, Harriet met Dr. Harry Lee Johnson, who was a professor in mathematics. On June 10, 1969, Harriet and Harry married in Roanoke, Va. Harriet and Harry built a loving home and enjoyed working on projects as a family.

Some interests that Harriet enjoyed were painting, drawing, botany, genealogy, poetry, photography, computer programming, reading, writing, woodworking, and trains. Harriet will be remembered as a loving and giving mother. She adored her three grandchildren.

A virtual memorial service is currently being planned.

In lieu of flowers, the family would appreciate memorials in Harriet’s name to the Alzheimer’s Association, or the National Audubon Society.