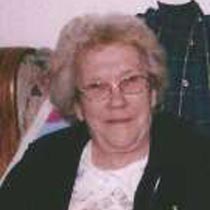 Betty Lou Johnson, 79, of Pearisburg, departed this life Thursday, April 28, 2016 at her home on Wenonah Ave. Born in Bluff City (Pearisburg) on November 23, 1936, she was a daughter of the late Edward and Carrie Smith Wilson.

She was preceded in death by her parents, her brothers Eugene, Junior and Homer Turpin and her sisters Lavern Lafon, Flossie Waldron and

Funeral arrangements are being completed at the Kendall Funeral Home in Pembroke. Online condolences may be sent by visiting kendallfuneralhome.com.