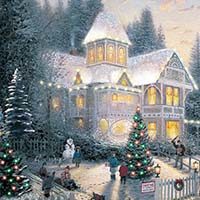 Edna May Dalton Jennings, 93, of Draper, Va., left her earthly home for her heavenly home on Friday, December 26, 2008. She was born on April 26, 1915, in Draper, and was the daughter of the late Effert and Sarah Carpenter Dalton. She was also preceded in death by her husband, Edwin Lewis (Buster) Jennings; three daughters, Betty Jane Jennings, Mary Helen J. Newton, and Linda Sue J. LaRue; two sisters, Lucy D. Phillips, and Anna D. Reynolds; and two brothers, Chester Dalton and Robert Lee Dalton.

She was the last child of five children. She was so proud to be a five generation family. The past 2 1/2 years she made her home at the Pulaski Health and Rehabilitation Center and she was member of the Draper United Methodist Church where she was a member of the United Methodist Women. Mrs. Jennings retired after 27 years from the Dublin Garment Factory.

Funeral service will be held Tuesday at 2 p.m. from Stevens Funeral Chapel with the Rev. Bryan Wyke officiating. Burial will follow in the Draper Cemetery. Visiting will be Monday evening from the funeral home where the family will receive friends from 6 to 8 p.m.

The family wishes that memorials be made to the Draper United Methodist Church, 3080 Greenbriar Rd., Draper, Va. 24324.

The family will be meeting at the residence of the daughter and son in law, Peggy and Kenn Bess, 2820 Brown Rd., Draper.

The family would like to extend their sincere thanks to all friends, family and caregivers for their continued support and love.