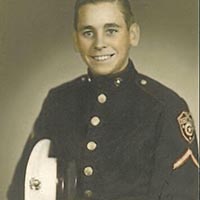 James Elmo Jarrett, 86, passed away Saturday, April 8, 2017 at his home in Radford. Jim owned and operated Jarrett Heating & Air and was a member of Carter Street United Methodist Church. He served in the U. S. Marines and was a proud member of VFW Post #776 in Radford.

He was preceded in death by his parents, Elmo and Edna Jarrett; his wife, Ruth Jarrett; and daughter, Debra Gibson.

Survivors include his daughter, Cathy Smith of Radford; son and daughter-in-law, James E. and Marianna Jarrett; grandchildren, Christen and Matthew Gibson, Chandra Smith and her fiancé Steve Rainey, and Erica and Michi Jarrett; sisters and brother-in-law, Glen and Jackie Webb, and Nancy Waddell; and many other relatives and friends.

The family will receive friends from 1 until 2 p.m. on Wednesday, April 12, 2017 at the Mullins Funeral Home in Radford. Funeral services will begin at 2 p.m. with Rev. William Ratcliff officiating. Entombment will follow in Highland Memory Gardens Mausoleum in Dublin.

In lieu of flowers, the family requests donations be made to the Veterans Administration.

The Jarrett family is in the care of Mullins Funeral Home & Crematory in Radford. www.mullinsfuneralhome.com