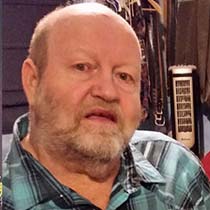 He was born at Norton, Virginia on July 9th, 1952, and was the son of the late John Henry James, Sr. and Ovie Taylor James. In addition to his mother and father, he was preceded in death by four sisters, Linda Lou and Brenda Sue James, Lona Blevins and husband Gaines, and Pauline Swindall and husband Lindy; four brothers, Willard and Walter James, Lonnie James and wife Doris, and Ronald James and wife Betty.

John was a member of the Cedar Grove Church of Christ.

He is survived by his loving wife and soulmate, Donetta Riddle James; two stepchildren, Amanda C. Wall and husband Aaron, Clifton Lee Clowers and Brittany Nicole Brock; one grandson, Caleb A. Wall; his dear loving mother-in-law Caroleene Riddle Clowers, who he thought of as his own mother, all of Narrows; a brother, Emory Allen James and wife Shirley of Eastanollee, Georgia; two sisters-in-law, Wilma B. James of Big Stone Gap, Virginia, and Doretta Riddle Collins and husband Donald of Pembroke, Virginia; a brother-in-law, Lawrence Hubert Riddle and wife Patricia of Narrows; several nieces and nephews.