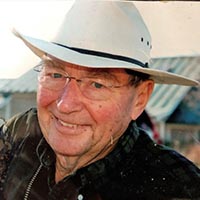 William Bolling Izard, 91, of Copper Hill, Va., passed away peacefully at home on his beloved Bolling Broke Farm, with his family by his side, on Friday, February 16, 2018.

He was born on June 6, 1926, in Roanoke, Va., and enjoyed his retirement in Floyd County for the past 30 years. Bolling attended Episcopal High School and Virginia Military Institute. After serving his country in the United States Navy, he completed his education at the University of Virginia, where he was known for his boxing prowess. Bolling was a prominent businessman and community leader in the Roanoke Valley, which he was proud to call home. He was affectionately known as Papa to his grandchildren and their friends. Bolling shared with them his love of the land and his uncanny nature for fun. He had a passion for people, the outdoors and enjoyed the camaraderie with his many friends in Floyd County.

The family gives special thanks to his caregivers Melissa Akers and Eric Law.

In lieu of flowers, memorial contributions may be made to St. Peter’s in the Mountains Episcopal Church, 85 Rock Ridge Road, Callaway, VA 24067.