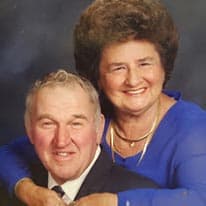 Donald Eugene Hylton, 85, of Floyd, went to be with his Lord on Sunday, December 12, 2021, at Roanoke Memorial Hospital. He was a devoted husband to the love of this life, Brenda Slusher Hylton, for 51 years. He was a loving father and papa and cherished his family dearly. He was loved and respected by everyone that knew him, and will be remembered for his firm handshake and loving hugs that he shared with everyone he met. Donald was a faithful member, head usher, and Deacon of Beaver Creek Church of the Brethren, and also Chairman of the Board of Trustees of the Beaver Creek Cemetery.

Donald was born July 5, 1936, in Floyd County, VA. After graduating in 1955, he was drafted into the United States Army where he served for two years. Following his service, he worked in Northern Virginia on heavy equipment with his younger brother Olen for ten years. He then returned home and started his backhoe experience with Archie Moran. That experience led him to start his own business in 1969, Donald Hylton Ditching Contractor. Donald spent over 35 years plowing cable for Citizens Telephone Cooperative as an independent contractor. In addition, he did backhoe work throughout Floyd County where he made many lifelong friends. He enjoyed farming, and assisted his father in maintaining the family farm for many years. He helped organize the first Hylton Family Reunion in 1985 and there have been 11 reunions over the years which were attended by families from many states.

Flowers are appreciated; however, donations may be made to the Beaver Creek Cemetery, 200 Wills Ridge Road, N.W., Floyd, VA 24091.