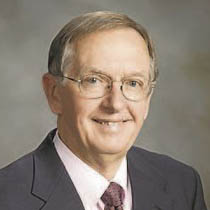 He grew up in Wellsville, N.Y., where he ran track, made great friends and good grades, and began tinkering with cars. He was a proud graduate of SUNY-Buffalo, Purdue University, and the University of Michigan where he developed lifetime relationships with his faculty mentors. He worked on the Super Sonic Transport at Boeing for several years after his master’s degree in the late 1960s, then went to the University of Michigan where he completed his Ph.D. in Aerospace Engineering and met and married the love of his life, Pat.

His first faculty job was at Old Dominion University in Norfolk, Va. In 1978, he started his long career at Virginia Tech as a professor of Engineering Science and Mechanics (ESM), retiring as the N. Waldo Harrison Professor. He loved his teaching and research on the mechanics of composite materials and structures, but he especially cherished the relationships he built with his graduate students. Through them, he left a legacy that stretches around the world.

Although he retired in 2010, he remained very active in his professional societies, reviewing journal articles, co-authoring papers with his former students, and supporting colleagues around the country. Among the many professional honors he received, he was especially proud to have been chosen Fellow of the American Institute of Aeronautics and Astronautics (AIAA).

Mike had many passions, but first among them were high performance cars, especially his 1963 Cobra and several Porsches. He seldom drove them, but loved their beauty and engineering. He ordered a Tesla 3 on the first day possible. He was known for his puns and loving to share his detailed knowledge about cars, airplanes, anything mechanical, and the latest devices he had acquired. In retirement, he also developed an interest in jazz and live music, and devoted significant time to the newly established Lifelong Learning Institute at Virginia Tech. He traveled around the world for conferences with colleagues and loved traveling and hiking with Pat.

Mike is survived by his wife of 44 years, Pat; his sisters, Julie Lobsinger and Suzanne Hyer Savona and their husbands; his brother, Philip Hyer; his uncle, Harry Hyer and his family; and many loving nieces and nephews and their children. He was also a cherished member of Pat’s extended family.

A celebration of his life will be held at McCoy Funeral Home in Blacksburg at 11 a.m., Saturday, February 18, 2017

In lieu of flowers, please consider a memorial gift to causes he supported: Virginia Tech Foundation in support of the Center for the Arts, http://www.givingto.vt.edu, or Earth Justice, http://earthjustice.org/.