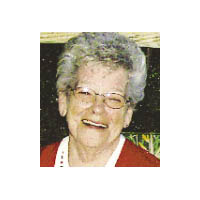 Peggy June “MeeMaw” Doyle Hurt, passed away on Tuesday, August 25, 2009, at her home in Hiwassee, Va. She was preceded in death by her husband, T-SGT, Buddy Taft Hurt; her parents, Goldie Walters and Samuel Doyle; sister, Janice Harris; and a brother, Carl Doyle.

As a military wife she traveled the world and never met a stranger. She was a devoted mother and grandmother, as well as a friend to all who knew her. She will be missed by many.

Funeral services will be conducted 2 p.m. on Friday, August 28, 2009, at the Chapel of John M. Oakey and Son, Salem with Pastor Neil Wood officiating. Interment will follow at Sherwood Memorial Park. The family will receive friends on Thursday, August 27, 2009, from 6 to 8 p.m. at the funeral home.

A special thanks to Francis Kast for being our Mama’s friend and to Joe-Joe for being her constant devoted companion.

In lieu of flowers, donations can be made in her name to the Humane Society.