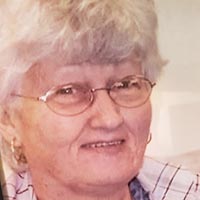 Tena Starr Clark Hughes, 69 of the Wolf Creek Community in Narrows, VA, passed away June 27, 2019 at her home. She was surrounded by her loving family at her side. She was born on August 29, 1949 in Giles County and was a daughter of the late James Edward Clark and Edna Fern Blankenship Clark Mullins. Besides her parents, she was preceded in death by her stepmother, Brenda Burton Clark.

Tena was a longtime employee of the Oxford Industries, first at the Wolf Creek location, then later the Pearisburg location until they closed in 1998. She worked at Carilion Giles Memorial Hospital in Pearisburg in the dining services until health issues prevented her from working.

Funeral services will be conducted, Saturday, June 29, 2019 at 2pm at the Givens – Riffe Funeral Chapel in Narrows with Harold Goins officiating with burial following in the Boyd Cemetery in Narrows. The family will receive friends at the funeral home on Saturday two hours before the service from 12 – 2pm.

Memorial donations may be made to Cedar Grove Church of Christ, Wolf Creek or the Cancer Kids and Christmas.

The family is being served by Givens – Riffe Funeral Ser­vice in Narrows, VA.