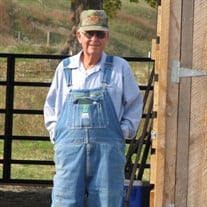 William O. “Chuck” Huffman passed peacefully at home on Saturday, July 24th, 2021 after 86 wonderful years. He treasured his family, his way of life and God’s creations.

He was kind, patient and caring. He was an exceptional husband, father and grandfather. He was a lifelong farmer and special friend to many. He was a prankster and loved to “pull one over on you”. He spent every day on the farm working cows and taking care of the land. He loved every second of it and you would never hear a complaint from him. His laugh was contagious and he lit up any room or field he was in. He spent many hours in the tractor and you would see his white pickup truck running up and down the road all day long.

Before he began farming he played for the St. Louis Cardinals minor league baseball team at second base. Actually, he and his wife of 66 years Peggy met at a high school baseball game and the rest was history. They had one daughter Shari and she was his pride and joy. She began helping him on the farm after she retired from teaching and they were quite the pair. His son in law Robert was like a son to him. Robert kept the farm equipment up and running and took the boss’s orders well! He served for many years on the Farmer’s and Merchants Bank, Narrows Livestock Market, Smyth Mutual and Ross Cemetery Boards. He was a man with so many wonderful talents and traits. One thing is for sure…the Sinking Creek Valley will never be the same.

Chuck leaves behind his loving and amazing wife Peggy J. Huffman. His precious daughter and son in law Shari and Robert Tripp. Granddaughter and husband Ashlei and Justin Barham. His great grandchildren Oscar and Gunner Barham, Kenadee Tripp and her mother Heather Stover. Nephews Joe Dowdy and Matt Dowdy and wife Kim and their daughter Lena. He also leaves behind many, many special friends. He was preceded in death by his parents Early B. “Speedy” and Ruth W. Huffman and his grandson William Robert “WR” Tripp, his father-in-law and mother-in-law, Ned H. and Pauline K. Dowdy, sister-in-law and husband Jane and Tom Hurd, and brother-in-law Hale Dowdy and his son Rusty.

We want to give a special thanks to his caregivers Allie, Phyllis and Theresa. They were crucial in his care and were so good to him. Thank you to Kindred Hospice for their wonderful care… especially nurses Lila and Jennifer.

Funeral services will be held Tuesday, July 27, 2021 at 12:00 noon in the Bethel United Methodist Church, Craig County, with Rev. Charles Stacy and Rev. Larry Thompson officiating. Burial will follow in Ross Cemetery, Craig County. The family will receive friends Tuesday from 10:00 am until service time. In lieu of flowers contributions may be made to the Simmonsville Volunteer Fire Department or to Craig County Rescue Squad. Arrangements by McCoy Funeral Home, Blacksburg, VA.