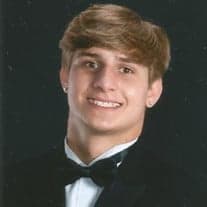 Gabriel Cole Howery beloved son, brother and friend passed away surrounded by his large and loving family on Tuesday 18 January 2022. “Gabe” as he was known to his family and friends was born on 13 March 2003 in Augusta GA to parents Freddie L. Howery II and Leslea S. Howery.

Gabe was known by his family and friends as being very loving, outgoing, witty, smart, ambitious and ready for anything. He was a young man with a huge heart, always there to give a hug when needed and tell you that everything is going to be OK. He had a great passion for life and a smile that lit up a dark room, was well mannered, polite and easy natured.

Gabe was a 2021 graduate of Christiansburg High School where he was a three-year letterman and two-year starter in the sport that was his first true love in his life, football! He played middle linebacker for the Blue Demons, a position he truly excelled at with his athletic ability, nonstop motor and drive and his high football IQ. Known as “Jimbo” for his love of Florida State Football, Gabe’s absolute love and passion for the game was what made him a true football fanatic and “the game of kings” as he always called it was something that brought great joy and happiness to his life.

Gabe’s other passions and interests were outdoor adventures and activities such as hunting, fishing and hiking. He loved playing video games especially with his younger brother Gunnar and spending time with and loving on his older sisters Alexandria and Ashton. Gabe adored and loved his siblings so very much and always took the role of protector when it came to them, especially his little brother but was also quick to take the role of the one needing to be coddled and taking care of his older sisters. His love for his family was always front and center in his life, Gabe always made sure that his family’s happiness and wellbeing was first and foremost in everything that he did.

Gabe was an employee of 84 Lumber in Christiansburg VA where he ran the shipment yard, loading and unloading trucks of construction cargo and building materials. In this role Gabe was known to get in early and leave very late, it was physically demanding and tiring, and it was a job that he loved and worked very hard at with plans on working his way up in the organization so that one day he could be working in the product sales side of the business.

Gabe touched many people in his life, often known as the one guy that you could truly count on. He made many friends in his short life, and he maintained those close relationships throughout his life. Once he was your friend, he was always your friend.

The Family asks in lieu of flowers that Donations can be made in Gabe’s name to St. Jude’s Children Hospital or the American Heart Association.

The Family would also like to say Thank you to the nurses at Carilion New River Valley Medical Center who took such good care of Gabe.
Visitation will be held Saturday, January 22, 2022, from 1-3 p.m. at Horne Funeral Home. Funeral Services will follow at 3 p.m. in the Chapel.