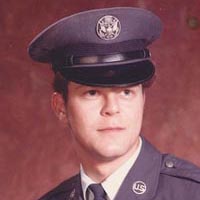 Gary Edgar Howell, 65, of Roanoke, Virginia, passed away on Friday, August 7, 2015 after a long battle with diabetes.

He was a 1969 graduate of Radford High School and beginning in 1972 served in the United States Air Force in both foreign and domestic operations. After his military service he pursued a career in electronics and communications.

He was preceded in death by his parents, Clarence E. and Dorothy P. Howell, and long time friends, Virginia Burke and Ruth Kirby.

Gary is survived by two sons, Donald B. Howell and Derek P. Howell, both of Houston Texas, and one brother and sister-in-law, Donald L. and Martha Kirby Howell of Lynchburg, Va.

Funeral services will be held at 2 p.m. on Monday, August 17, 2015 at the Mullins Funeral Home in Radford with Rev. Don Shelor officiating. Military graveside services will follow in the Southwest Virginia Veterans Cemetery in Dublin. The family will receive friends from 1 p.m. until the time of the service.

In lieu of flowers, the family requests that contributions be made to the American Diabetes Association, 1701 N. Beauregard St., Alexandria, VA 22311.

The Howell family is in the care of Mullins Funeral Home & Crematory in Radford. www.mullinsfuneralhome.com