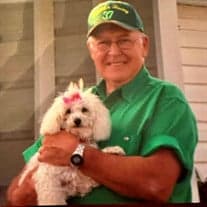 Harvey Emory Howard (Emory), 79, of Blacksburg Virginia went to be with his Lord and Savior on Thursday night of January 27, 2022. He is singing and dancing with his loving mother, Dorothy Howard and father, Harvey Howard. He is also proceeded in death by his Brother, David Howard and grandson Charles “Patrick” Underwood.

Emory worked at Yokohama for 31 years. After he retired you could find him out in his garage, at an auction, or at the race track with a chicken drumstick in his hands watching his son race. He was a lover of all dogs, auctions, getting Ace’s in Rummy, a cold bottle of coke, racing, watching television (on maximum volume) and yellow tomatoes.