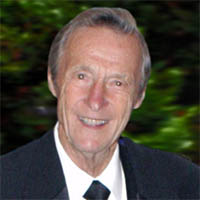 Dr. John Frank Hosner, age 93, of Blacksburg, VA, passed away on September 13, 2018 at Lewis Gale Hospital, Montgomery – after the first and only night he had ever spent in a hospital. He was the Professor Emeritus and Honorary Founding Dean of the College of Natural Resources and Environment (CNRE), originally known as Forestry and Wildlife.

An avid runner, softball player, loving husband and father, friend, mentor, and veteran of the U.S. Army Air Corps during World War II, John was a true force of nature.

He received his B.S. degree from Michigan State University, his M.S. degree from Duke University, and his Ph.D. from the State University of New York. He came to Blacksburg and Virginia Tech in 1961 as the first department head of Forestry and Wildlife growing the department to the level of college status. John retired in 1992 but continued his fundraising work for the college. John was honored by the Society of American Foresters (SAF) with its highest award, the Gifford Pinchot Medal, for his exceptional contributions to the field of forestry during his 47-year career. He served on many other forestry boards and associations and received numerous professional and academic awards.

As a devoted runner, John set records in his age-group during every decade in which he ran – both nationally and internationally, exciting the Blacksburg running community when he set the world record for the indoor mile at the age of 75. John cruised through races throughout the U.S., including the Boston and New York Marathons and winning overall in age-graded races in St. Louis, MO. He ran his last race at the age of 90.

John is survived by his loving wife of 40-plus years, Tenna Hosner; his daughter, Angela Serody; his son and daughter in-law, David and Patsy Hosner; and grandchildren Jason Hosner, Sara Serody, and Dylan Serody; and furry friend Peary.

John’s favorite song, “Key Largo,” summed up his relationship with Tenna, as well as his life – “Honey, I was your hero, and you were my leading lady. We had it all, just like Bogie and Bacall. Starring in our old late, late show; sailing away to Key Largo.”

John asked that there be no service; however, there will be a celebration of his life at a later date. In lieu of flowers, donations may be made to the John F. Hosner Legacy Fund, https://cnre.vt.edu/alumni-and-giving/give-to-the-college.html or contact Emily Hutchins, Chief Advancement Officer, (540) 231-8859, ehutch@vt.edu or to the charity of your choice. Arrangements by McCoy Funeral Home, Blacksburg.