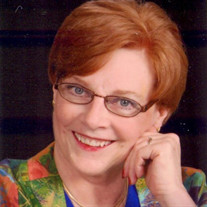 Patricia Knowles “Pat” Horne, 67, went to be with the Lord on March 30 2018, her 49th wedding anniversary, at a Roanoke hospital with family by her side.

Pat was a former Miss Montgomery County. She taught for The Floyd Ward School of Dance for several decades and to several generations. She was honored with an invitation to perform a portion of Swan Lake at the prestigious Kennedy Center in Washington DC. Pat was asked to create and teach in the dance department at Ferum College and did so for many years. In her “free time” she volunteered with Christiansburg High School, Blacksburg High School, Shawsville High School and the Christiansburg Community Theatre as choreographer and occasional performer with a beautiful singing voice. She retired after over three decades but could not stay away from doing what she loved and taught “her little ones” basic ballet at the Christiansburg Recreational Center until her death.

Pat also began working in the family business, Horne Funeral Home & Crematory, in 1987 and continued to her death. She served as Corporate Secretary-Treasurer and received, served, and comforted others during their time of need.

Pat was a past Worthy Matron of the Eastern Star, a member of the National Society Daughters of the American Colonists, and a former member of the “Ladies Auxiliary” for the Christiansburg Rescue quad and Fire Department.

Pat is survived by her husband of 49 years Richard H. “Dickie” Horne, her daughter and son-in-law; Dr. H. Leveta Horne and Eric Brown of Orlando FL, her son and daughter-in-law; Brian R. H. and Amy Horne of Christiansburg, and four granddaughters, Rachel, Grayce, Quinn, and Makenna all of Christiansburg, her sister and brother-in-law Katinka and Dale Hawley and their sons Jeff and John, her brother Mike Knowles, special friends Terry and Ed Wilson, and her beloved pets.

The family will receive friends at Horne Funeral Home on Friday, April 6, 2018 from 1-3 p.m. and 5-8 p.m. with an Eastern Star Service, open to the public, to be held at 8:00 p.m. in the Horne Chapel. The funeral service will be held at 2:00 p.m. on Saturday, April 7, 2018 at St Paul United Methodist Church with Father Alex Darby and Dr. Don Makin officiating. Interment will follow in Sunset Cemetery. In lieu of flowers the family requests contributions be made to the HUMANE SOCIETY OF MONTGOMERY COUNTY, P.O. Box 287 Blacksburg, VA 24063.