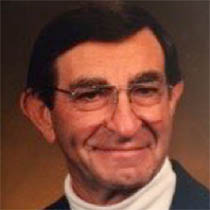 The family will receive visitors on Friday March 10th from 6-8PM at McCoy Funeral Home, 150 Country Club Drive, Blacksburg, Virginia 24060. A Celebration of Life service will be held on Saturday March 11, 2016 at 9 AM at Blacksburg United Methodist Church; Reverend Joe Carson will be officiating. A private burial service with family will follow in Big Stone Gap, VA, his “home” at Powell Valley Memorial Gardens.

Atwell was born February 9, 1933 in the Wildcat of East Stone Gap, Virginia to Alfred and Maxie (Jenkins) Hopkins. He graduated from East Stone Gap High School, and attended Milligan College where he played basketball and studied Mathematics. On December 31, 1953 he married his sweetheart Marcella Wright Hopkins. He served his country in the US Army Artillery, from 1953-1955. After his military service he began a very successful career with the National Biscuit Company (Nabisco) from 1955 until his retirement in 1991 as a Divisional Sales Manager in Charlotte, NC. He was a Lay Leader and Adult and Children’s Sunday School teacher for several decades in the United Methodist Church.

After retiring, he loved spending time playing with his grandchildren and watching them play sports. He loved the outdoors and hunting and fishing. He was a man of unconditional love, unconditional giving of his support in all things, and a true man of God.

Atwell is survived by his devoted wife of 64 years, Marcella Wright Hopkins, his sons Mark Wayne Hopkins and his wife Marty of Canton, MS, Timothy Scott Hopkins and his wife Dee and their children, Will and fiancé Hannah Jones of Rockville, MD, Anne Scott, and Clay Hopkins of Blacksburg, VA. He is also survived by his Mother in law, Helen (Henry) Wright of Big Stone Gap, VA, brother and sister in Law Larry and Gale Wright of Lexington, KY and their children Steve, Allison, and Mandy, as well as many other nieces and nephews.

In lieu of flowers, donations can be made to Samaritan’s Purse or Young Life of the New River Valley.