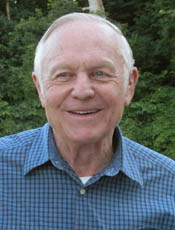 Bobby Mal Honeycutt, Captain, Retired, of Floyd, Va, passed away on Thursday, April 10th, after a long illness. He was 79. Formerly of Delaplane, he was born to the late Josie and Grover Honeycutt in Hickory, NC, on December 15, 1934. He is survived by his wife Beth Rosine Bonanno Honeycutt; a daughter, Brece V. Honeycutt (Martin Mitsoff) of Sheffield, MA and a son, Scot N. Honeycutt (Bettina Honeycutt) of Charleston, SC (both children of Peggie Jean Horton Honeycutt, deceased); two step-sons, K. Gregory Duncan (Kerstin Demko-Duncan) of Leesburg, VA and
Christopher S. Duncan (Charity Duncan) of Marshall, VA, and seven grandchildren: Carter, Logan, Spencer and Peyton Honeycutt; and Nikolas, Nathan, and Joel Duncan. He is also survived by a brother, Blake Honeycutt of Hickory, NC and a sister, Peggy Honeycutt of Roanoke, VA. He was also pre-deceased by sister Doris Russ of Greenville SC.

Mal Honeycutt graduated with a degree in Electrical Engineering from North Carolina State University and went to work in his family’s business until he decided to follow his dream, joined a flying club, and went on to become a commercial pilot. He flew for Eastern Airlines for 24 years and Trump Airlines for 5 years, based out of Ronald Reagan National Airport in Washington DC. He lived in Delaplane, VA, until he retired with his wife to the Blue Ridge mountains of Floyd, VA. Here he spent his remaining years enjoying his love of the outdoors and fishing and hiking with his grandchildren. He lived life to the fullest and will be greatly missed.

A service will be held on Monday, April 14th, at 1:00 PM, at the Honeycutt home. In lieu of flowers, the family requests that donations be sent to the Heritage Hall “Resident’s Fund,” in loving memory of Mal Honeycutt. Please send contributions to Heritage Hall Nursing Home, 16600 Danville Pike, Laurel Fork, VA 24532.