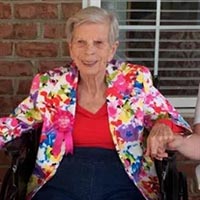 Sarah Barbara Holmes, formerly of Scarbro, West Virginia, and Dunedin, Florida, passed away in Christiansburg. Virginia, on August 17, 2020. She was born on August 4, 1936, in Minden, West Virginia, a daughter of Margaret Reese Wilkerson Clark and Cecil Clark, both of whom preceded her in death.

Sarah was a devoted wife, mother, grandmother, sister, aunt, and friend. She loved singing, particularly in her church choir, walking on the beach, shell collecting, and watching sports – so much so that she went to watch not only her own children play, but also children from her church family.

Sarah was the widow of Burton “Bo” Holmes, to whom she was married from 1988 until his death in 2007. Sarah and Bo had a joyful marriage, living together in Dunedin, Florida. They were members of North Dunedin Baptist Church, where she sang in the choir. Before moving to Dunedin in 1985, she belonged to Scarbro Baptist Church, where she also enjoyed singing in the choir. She moved to Dunedin after the death of her first husband, Robert Stoner, to whom she was married from 1955-1984. Sarah lived in Dunedin for 33 years, until 2018, when she moved to Commonwealth Assisted Living in Christiansburg, Virginia, and attended the Cambria Baptist Church.

Sarah is survived by her three children, David Stoner of Fayetteville, Chrystal Stoner Lively of Oak Hill, and Kevin Stoner of Christiansburg, and by her grandchildren, David Joshua Stoner and Melanie and Christina Cottle; Brandon Browning, his wife Angel, and Travis Martin; and Charlie and William Stoner; and by her great-grandchildren David Joshua II, Hayden, and Laden James Stoner, and Madison, Landon and Joseph Chase Browning. In addition, she leaves behind Chrystal’s partner, Eugene McClung, and Kevin’s partner, Diane Butler. She was preceded in death by David’s wife, Dremia.

Sarah is also survived by her sister, Sue Perdue, her cousins Herb and Linda Wilkerson and Ada Kaye Welch, and her niece and nephews, Michelle Perdue Dempsey and husband Kenneth; Scott Perdue, and Eric Perdue. Sarah also leaves behind cherished friends Camille Daniels of Minnesota and Frances Doyle of Tennessee.

A celebration of Sarah’s life will be held at a later date.