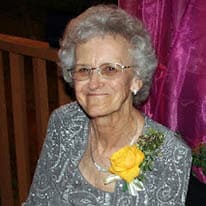 Everyone who knew her knew she had a smile on her face, and they were happy to see her. She was a gentle, kind, and humble soul. At family reunions her food was the first to go and everyone would try to figure out what she had made so they were sure to get a bite before it was gone. She lived for her children, grandchildren, and great grandchildren and was adored by every one of them. She was known as Ma-Ma to her grandchildren and great grandchildren. Most years, she made every family member a handmade quilt, which was beautifully stitched with love. Quilting and crocheting was one of her favorite pastimes. You didn’t spend the night at her house without waking up to homemade biscuits, sausage gravy, and fried apples. She poured love into everything she touched and she will be greatly missed by her family and all who knew her.

Funeral services will be held Friday, January 21, 2022 at 2 pm at Indian Creek Primitive Baptist Church with Elder Lowell Hopkins and Elder Carlton Brown officiating. Interment will follow at Captain George Quesenberry Cemetery in Indian Valley. The visitation will be on Thursday, January 20, 2022 from 6 pm to 8 pm at Maberry Funeral Home.