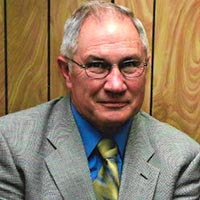 Larry Nowlin Hollandsworth, 78, of Little Montgomery, passed away on Thursday, December 24, 2020 and is now asleep in Jesus. He was born in Floyd County, Virginia on June 6, 1942.

He is preceded in death by his parents, Wilbert Clive and Ruby Alma; sisters, Ruth, Bessie, June and Majella; and brothers, Herbert, David, Newton, and Randolph.

Larry graduated from Willis High School and immediately enlisted in the United States Air Force. He courageously served his country for four years during which he met the love of his life, his sweetheart, Sandra.

Larry grew up on a dairy farm in Willis which blessed him with the knowledge to cultivate numerous crops each season and raise livestock on the land he worked so tirelessly to obtain. By doing whatever it took to provide for his family, his children learned the lesson of hard work and determination.

Larry was a humble man, but he was proud of the simple life he lived on Little River, sharing his dreams with his beloved, Sandra, raising their children with both faith and love.

Funeral services will be held on Monday, December 28, 2020 at 1:00 p.m. in the Maberry Funeral Home Chapel with Elder Alan Terry, Elder Carl Terry, and Elder Mark Terry officiating. Interment will follow in the Hollandsworth Cemetery and Military Rites by the Seymour Johnson Air Force Base. The family will receive friends from 11 a.m. to 1 p.m. at the funeral home prior to the service.