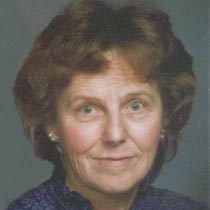 She leaves a son, Roger P. Hjulstrom of Blacksburg; a daughter, Sandra J. Namin and her husband, Mehrdad of West Boylston, Mass.; a brother, Charles Ward and his wife, Nancy; two sisters, Charlotte Holbrook and her husband, Herbert and Nancy Kingston; four grandchildren, Matthew Namin, Sherry Volk, Emily Hjulstrom and Nathan Hjulstrom; a great granddaughter, Jolie Volk; and several nieces and nephews. She was preceded in death by her son, Eric D. Hjulstrom in 2002.

She was born in Hopkinton, Mass. the daughter of William M. and Ruth I. (Braley) Ward. She lived most of her life in central Massachusetts, including Princeton and Millbury before moving with her husband nine years ago to live with their son in Virginia.

Barbara worked at Paul Revere Insurance Company in Worcester, Mass. for several years before retiring. Previously, she worked at various companies including, Brown Shoe Company and was a nursing attendant at Westborough State Hospital. Barbara was a former member and Sunday school teacher at the First Congregational Church in Princeton. She enjoyed volunteering her time and was a former Cub Scout Den Mother, 4-H Leader and was a volunteer at the Massachusetts Audubon Society in Worcester. She attended New England School of Art as a young woman and continued to enjoy drawing throughout her life.

Relatives and friends are invited to attend a funeral service for Barbara at 10 a.m. on Saturday, July 30, 2016 in the Miles-Sterling Funeral and Tribute Center, 100 Worcester Rd., Sterling, Mass. Burial will follow in Worcester County Memorial Park in Paxton.

In lieu of flowers, donations may be made to the Alzheimer’s Association, Massachusetts/New Hampshire Chapter, 480 Pleasant Street, Watertown, Mass. 02472, or a charity of one’s choice.www.milesfuneralhome.com