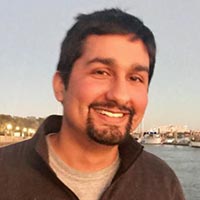 On Tuesday, December 11, 2018, Jason Alec Hilsen passed away in Blacksburg, Va. Born on September 5, 1991 in Livingston, N.J., Jason moved to Virginia at the age of five, excelled in school (with some mischief along the way), and graduated Albemarle High School in Charlottesville in 2009.

He went on to attend Virginia Tech and graduated in 2014 with a BS in Minerals and Mining Engineering, then to complete masters coursework also at Virginia Tech. Jason was a graduate assistant at Eriez, and worked as an intern at Martin Marietta in Georgia for a summer and worked in Utah for a semester for the company sponsoring his graduate work.

Jason had the ability to move with grace and levity through whatever situation life threw at him. He spread his sardonic wit with a smile, charming those around him. He was a genuine person with great empathy and compassion for everyone in his life. Jason valued action and did his best to live in a way that showed his loved ones he cared, particularly his family, girlfriend, and friends. He showed his generous nature frequently and was always willing to lend a helping hand whether it be helping a friend catch up on rent or helping his roommate walk his dogs, Roscoe and Lola Knode.

Jason rarely missed a football Sunday, cheering for the LA Rams and following his Fantasy Football team closely (he won his league shortly after his passing). He was a fan of the Brooklyn Nets, and loved going to Virginia Tech football and basketball games. Jason spent a great deal of time exuberantly talking and analyzing football strategy. He was a competitive man by nature, and loved beating his family members at Scrabble and cards, his friends at board games and pool, and spending vast amounts of time playing video games unlocking all possible achievements and collaborating with teammates on Overwatch.

Jason enjoyed being active and engaging in healthy hobbies as well, playing with animals, learning to cook, exercising, and playing tennis. He enjoyed hiking in the mountains and visiting the beach, traveling, visiting his family, and even being coaxed into singing karaoke occasionally. Jason loved unconditionally and his beautiful spirit will be deeply missed by all who loved and knew him.

A gathering and celebration of Jason’s life is being held from 1 until 3 p.m. on Sunday, January 6, 2019 followed by a 3 p.m. memorial service at John M Oakey & Son Funeral Home, Salem.