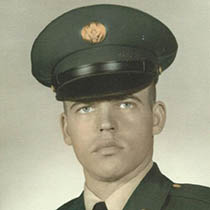 Clarence Edward Higgs, 73, of Cabot Drive, Pearisburg, departed this life Monday morning, December 1, 2014 at his home. Born in Pearisburg on June 24, 1941, he was a son of the late James Harvey and Nellie Griggs Higgs.

Clarence was a veteran of the U S Army, retired from RAAP with over 38 years if service and was a member of The Church of Jesus Christ of Latter Day Saints, New River Ward in Pembroke.

He was preceded in death by his parents, and his brothers Willie and Harvey Lee Higgs.

Funeral services will be conducted Thursday at 2:00 pm in The Church of Jesus Christ of Latter Day Saints in Pembroke with burial following in Birchlawn Burial Park in Pearisburg. The family will receive friends at the Kendall Funeral Home, 605 Snidow St., Pembroke Wednesday evening from 6 until 8 pm. Online condolences may be sent by visiting kendallfuneralhome.com.