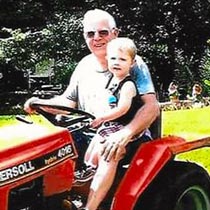 Kelly Eugene (Gene) Heslep, 73, of Elliston, passed peacefully into the arms of his waiting Savior, Jesus Christ on Tuesday, July 19, 2016. He was a charter member of Seneca Baptist Church where he served as a Deacon and Elder. Gene was retired from Radford Army Ammunition Plant, but was also a master carpenter and mechanic.

Thank you to the Palliative Care Unit at Carilion Roanoke Memorial Hospital, Dr. Rasouli of ICU and Good Samaritan Hospice.

Funeral services will be conducted at 1 p.m. Friday, July 22, 2016 in the Seneca Baptist Church with the Pastor John Collins officiating. Interment will follow in the Belmont Cemetery, Christiansburg. The family will receive friends from 4 to 8 p.m. Thursday evening at the Seneca Baptist Church, Elliston. Arrangements by McCoy Funeral Home., Blacksburg.