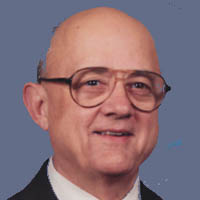 Tom was born on August 8, 1925 in Richmond, VA to Arthur Henry and Gertrude Waltz Herrmann. He was baptized and confirmed at Bethlehem Lutheran Church, where he attended parochial school. After graduating from John Marshall High School, he began his college studies at the University of Richmond. He interrupted his college days to serve as an officer in the United States Navy during WWII, then returned to University of Richmond and received a degree in Business and Finance. Tom was a trust officer at First and Merchants Bank which ultimately became Bank of America and from which he retired from his position as Vice President.

Tom was dedicated to his service of others in work and was an active member of his church. He served as treasurer of the Virginia chapter of the American Lung Association, Redeemer Lutheran Church in Richmond and later Luther Memorial in Blacksburg.

Tom and Lou retired to Blacksburg to be close to family and enjoy the beauty of the Virginia mountains. They shared a love for music and frequented concerts at Virginia Tech. Tom was a loving husband and father. He will be missed for his calm, quiet thoughtfulness, honesty and compassion.

A memorial service will be held Monday, May 12, 2014 at 4:00 pm in the Luther Memorial Lutheran Church. Graveside services will be held Tuesday, May 13, 2014 at 10:00 am at Sherwood Memorial Park, Salem. Arrangements by McCoy Funeral Home, Blacksburg.