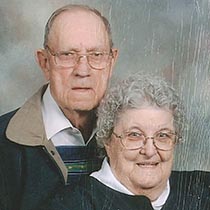 George Washington Henley, 94, of Radford, passed away Tuesday, March 25, 2014. He was a member of Calvary Baptist Church and retired from the City of Radford where he operated a backhoe. He was a World War II U. S. Army veteran and a member of VFW Post 1115 in Hillsville.

He was preceded in death by his parents, Andrew Fulton and Mary Edna Clark Henley, 6 brothers and 2 sisters.

Survivors include his loving wife of 68 years, Dona Vires Henley; daughters and sons-in-law, Mary Carper of Shawsville, Sylvia and Johnny Harris of Parrott, and Shelby and Phillip Wingo of Radford; sons and daughters-in-law, Dallas and Margaret Henley of Fredricksburg, and Gary and Kaye Henley of Pulaski; sister, Margaret Snyder of Christiansburg; 17 grandchildren, 27 great-grandchildren and 2 great-great grandchildren.

Funeral services will be held Thursday, March 27, 2014 at 7:00 pm at the Mullins Funeral Home in Radford with Rev. Brian Cockram and Rev. O. D. Morgan officiating. Graveside services with full military honors will be held Friday, March 28, 2014 at 11:00 am at the Southwest Virginia Veterans Cemetery in Dublin. The family will receive friends from 5:00 pm until 7:00 pm Thursday evening at the funeral home.

In lieu of flowers, the family requests that contributions be made to the Southwest Virginia Veterans Cemetery Volunteers, c/o Mary Lou Summers, PO Box 11373, Blacksburg, Virginia 24062-1373.

The Henley family is in the care of Mullins Funeral Home & Crematory in Radford. www.mullinsfuneralhome.com