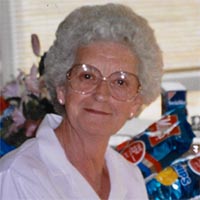 Claudine Shepherd Henderson, age 89, originally of Blacksburg, VA went home to be with her Lord , Savior, and friend, Jesus Christ on Wednesday, September 25, 2019, at her daughter’s home in Dublin, VA. She loved the Lord and dedicated her entire life to leading others to him.

Because she became a widow at such a young age, to support her children, she was a cafeteria worker at Blacksburg High School and later worked for Gateway Baptist Church. She was a member of Lusters Gate Baptist Church, later known as Gateway Baptist Church, under the ministry of Dewey Weaver. The words to accurately describe just what she meant to the people in her life are difficult to find. The level of her devotion to her work as a teacher at Gateway Christian Academy reached multiple generations and beyond. She loved everyone she was in contact with and was affectionately known as “Grandma Dean”. She treated everyone as her own and that’s why she was everyone’s “Grandma Dean”. She held another name, “Granny Cotton”, but no matter the name, they were received with respect and love.

The family of Grandma Dean is so thankful for the outreach and prayers from everyone, and we want to give a special “thank you” to Dr. Knotresha Stewart for her love for Grandma Dean. You helped more than you will ever know. Also, thank you to Intrepid Home Health and Hospice. You have been like family to us.