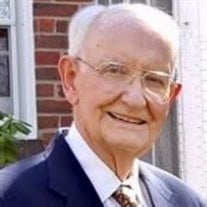 John “Eric” Helsing, 87, of Blacksburg, VA passed away unexpectedly on Friday, June 25 at his home. Eric was born in New Jersey on November 6, 1933 to John and Martha Helsing and grew up in Tenafly, NJ. He earned a bachelor’s degree (Sociology) in 1955 from Muhlenberg College in Allentown, PA and a law degree from Rutgers University Law School. He also served in the U.S. Army.

He married his beloved wife, Lorraine, on September 16th, 1961. That same year, he joined the law department at Mutual Benefit Life Insurance Company. Eric and Lorraine lived in Ft. Lee, NJ, before moving to Bernardsville, NJ, where they raised their three daughters. In 1981, Eric was promoted to Sr. Vice President and Chief Operating Officer of the company’s Western Home Office, so the family moved to Kansas City. He retired from Mutual Benefit in 1988 and then served for several years on the faculty of William Jewell College, in Liberty, MO, becoming Chairman of the Department of Business Administration and Economics and the Major and Dorothy Hull Chair of Communication in Business and Leadership in 1990. He also served as Independent Chair of the Board of Trustees for Commerce Funds in Kansas City, from its inception in 1994 through 2010. Throughout his career and into retirement, Eric enjoyed being an active community volunteer and served on many boards. After retiring from William Jewell College, Eric and Lorraine moved to Blacksburg, VA, where they were gardeners, tennis players, and members of the New Mount Zion Lutheran Church.

In addition to Lorraine, his wife of 60 years, and their dog Gerath, Eric is survived by his sister Ethel Van Arsdale, his three daughters, Dawn (Tony) Wolters, Karen (Dave) Helsing, Deb Helsing (Mike Lamenza), two granddaughters, Josie and Miranda, and other extended family.

The family would like to thank Eric and Lorraine’s neighbors and Mount Zion Lutheran Church for their friendship and support. In lieu of flowers, memorials may be sent to: