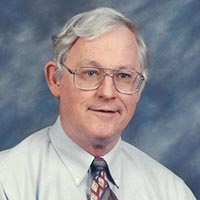 John earned his B.A. at Southern Illinois University in Carbondale. He was chosen outstanding senior mathematics major and was graduated with high honors in 1964. He next attended Purdue University on several assistantships and was awarded the Ph.D. in mathematics in 1970. His thesis was “Two Topics in Recursive Function Theory.” John then accepted a position as associate professor of mathematics at Radford College in Radford, Virginia. He later taught there in the Computer Sciences Department, which he helped to organize in 1989. John retired in 2005.

On 14 August 1981 he married Jane Smiley (nee Purtle) at Radford, Virginia. In 1990 she was granted an uncontested divorce.

John lived at Radford, from 1970 until 2014 when he moved to St. Charles, MO. His hobbies included playing the piano, following National League Baseball, collecting stamps, and cooking. He was once an excellent left-handed tennis player. He liked most board and card games, but his favorite was bridge. For many years, John had been a member of the Administrative Board of the Methodist Student Center at Radford, and he served as treasurer for six years. He taught the Men’s Bible Class at Grove United Methodist Church in Radford, where he was a member from 1971 to 2014. Since coming to St. Charles, he had been a member of First United Methodist Church.