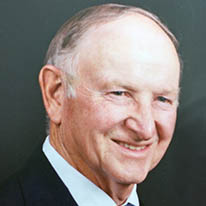 Howard thoroughly enjoyed his family, hunting, vegetable gardening, and researching family history. He loved to tinker and could fix anything. He received his amateur radio license in 1952 and Master Watchmaker certificate in 1956. Ham radio (W4MTT) was his passion for many years, and he loved making broken watches and clocks live again.

Howard always helped his family. He was a gentle, shy, live-and-let-live neighbor, a reliable and dependable employee, a quiet member of the community. He loved Rich Creek. Hard working. A man who kept his word. Took care of his parents in their old age and infirmity. Lived an honorable life and was an example for his two sons. Howard was a Master Mason in John Dove Lodge #78 AF&AM for more than 60 years and a member of Rich Creek First United Methodist Church.

After graduating from Peterstown High School, Howard joined the United States Air Force. In 1952, he married the love of his life, Evelyn Keatley. They moved to Vallejo, California and lived there during Howard’s military service in the Air Force where he rose to the rank of Senior Airman. Howard proudly served his country during the Korean Conflict and was stationed in Hawaii, Okinawa and the United States. Upon his discharge from the Air Force, he and Evelyn moved to Rich Creek, Virginia to be near family. With 40 years of service in the Electronics Shop at the Radford Army Ammunition Plant, Howard retired in 1992.

Graveside services with military rites will be held at 11:00AM on Friday, July 16, 2021, at Sunrise Memorial Gardens in Rich Creek, VA, with Pastor Aubrey Whitlow officiating. Visitation will be from 6:00PM until 8:00PM on Thursday, July 15, 2021, at the Broyles-Shrewsbury Funeral Home in Peterstown, WV.

In lieu of flowers, the family requests that memorial contributions be made in Howard’s name to the Giles Health and Family Center (701 Wenonah Ave., Pearisburg, VA 24134).