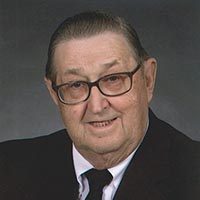 He retired from the U. S. Air Force with the rank of Master Sergeant after 22 years of service. He worked as a meat cutter all his adult life. He and his family went to Belspring to retire and later moved to Fairlawn. He worked 15 years at Ted’s Market as meat market manager and for Wades Foods in Christiansburg, Dublin, Radford and Pearisburg for several years. He was a member of Fairlawn Baptist Church.

Bill never knew a stranger. He liked to joke with people, and someone said the air was so much lighter when he was around. He thought so much of others that when he went to chemo treatments years ago, he always took big candy bars to the nurses.

He was preceded in death by his parents, George and Bertha Heineman; sisters, Beverly Allen, Gerry Allen, Virginia Custer and Evelyn Bundy; and brothers, Charles, John, and Richard Heineman.

He is survived by his wife of 65 years, Betty Dean Heineman of Fairlawn; son, Keith Heineman of Clifton Forge; daughters and son-in-law, Melanie and Randy Boyd of Dublin, and Terry Pugh of Radford; Grandsons, Justin (Brandy) Boyd of Moyock, N.C. and Jared Pugh of Myrtle Beach, S.C.; great grandsons, Henry and Lachlan Boyd of Moyock, N.C.; brother, Edward (Leona) Heineman; sister, Nancy (Doug) Baker of Wisc.; and many other relatives and friends.

The family will receive friends from 10 a.m. until 12 p.m. on Saturday, December 14, 2019 at the Fairlawn Baptist Church. Funeral services will begin at 12 p.m. with Rev. Greg Harrell and Justin Boyd officiating. Interment will follow in Sunrise Burial Park in Radford.

The Heineman family is in the care of Mullins Funeral Home & Crematory in Radford.