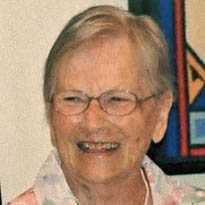 Lorraine Heindel, age 99, passed away on Thursday, August, 5 2021 in Blacksburg, Virginia. She resided there since 2003 and prior to that she lived in Kaukauna, Wisconsin. In 1942, she married Eugene Heindel and raised five children.

Quiet and peaceful, Lorraine lived a simple life nourished by the love for her family and her faith in God. We all carry with us wonderful memories of her, and we’ll miss her dearly. She was an amazing individual.

Per Lorraine’s wishes there will be a funeral mass held at St. Mary’s Catholic Church in Blacksburg at 2 p.m. on Wednesday, August 25, 2021. Her burial will be in Holy Cross Cemetery in Kaukauna, Wisconsin. In lieu of flowers, donations can be sent to the Warm Hearth Foundation.