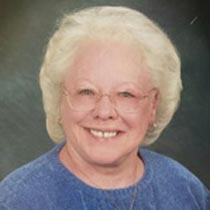 Patricia Ann “Patti” Heim, 69, of Copper Hill, VA, and formerly of Tazewell, VA. passed away peacefully at her home on April 18, 2016. Patti was awarded a Lifetime Membership in the Carilion Tazewell Community Hospital Auxiliary after 23 years of volunteer service, many years serving at auxiliary president.

Patti also served 16 years on the board of the Tazewell Community Foundation from its inception until resigning in 2015 for health reasons. She was a lifetime member of the Roxbury Church of the Brethren.

At Patti’s request a private service will be held at a later date. In lieu of flowers donations may be made to the Carilion Tazewell Community Hospital Auxiliary, 141 Ben Bolt Ave. Tazewell, VA 24651.

The family would like to thank Carilion New River Valley Medical Center, Carilion Home Health, and Blue Ridge Cancer Care, for all the care and support for Patti.

Online condolences may be made at www.gardnerfuneralhomefloyd.com. The family is being served by Gardner Funeral Home, Floyd, VA