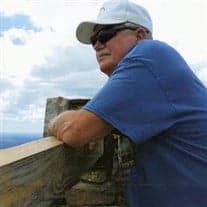 A.C. spent his childhood in Greenville, WV. His family relocated to Peterstown WV during his high school years, where he met his high school sweetheart and later to become his wife of 49 years. Shortly after graduation, he enlisted in the Army in 1971 and spent 9 years serving his country.

A.C. spent many years as a volunteer firefighter and was named fireman of the year in 1977. He worked at Wolverine Gasket in Blacksburg, Va., most of his working career. He was a member of the Mt. Tabor Ruritan Club for 20 plus years. He loved working the fish fries and being Smokey the bear in the parades and all the events to help the community.

A. C. was an avid sportsman and outdoorsman. He played in many softball leagues and coached several little league teams. He loved hunting and fishing and even more he loved teaching his children and grandchildren how to hunt and fish. He always looked forward to the many fishing and camping trips he took with his son and grandson. He even loved fishing when his grandson forgot to tie off the boat and the boat started floating down the river with no one in it. But his patience ran thin when his son wrecked his fathers truck 3 times in one day. In later years, his passion was bear hunting. Although the only shooting he did was with his camera. He also loved Nascar, 4 wheeling and traveling to watch the Hokies play football.

If you were a friend of A. C.’s you became part of the family. And, no matter what time of the day or night you needed something, he was there for you. He would have a Dr Pepper in his hand, but he’d be there. And, if anything around the house needed fixing, he would eventually get to it.

But more than anything else he loved his family. Especially, when Wilbur was on the loose.

He is preceded in death by his father Clark Hedrick and his mother Martha Frazier, as well as 2 brothers, Jackie and Randy. He is survived by his wife and high school sweetheart, Connie Hedrick. 2 children, Misty Hedrick and Cliff, Jamie Hedrick and Amie, 4 grandchildren, Scottie, Niki, Ashlyn and Aidan, one greatgrandchild, Tiffany Grace (The grandchildren and great granddaughter were the light of his life). One sister Brenda and many nieces, nephews, cousins, and special friends.

In lieu of flowers, please make a donation to the Bear Hunters Association on A.C.’s behalf.

At his request there will be no funeral services. A celebration of life will be held in his honor at a later date. The family will let everyone know the details as preparations are finalized.