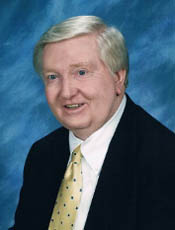 David Talmadge Hazelwood, 69 of Pearisburg, VA went to be with the Lord Friday, April 11, 2014 at his home in Pearisburg. David was born on February 10, 1945 in Roanoke, VA and was a son of the late Andrew D. Hazelwood and Josie Eanes Hazelwood of Roanoke who passed away Saturday, April 12, 2014. Besides his father, he was preceded in death by one sister, Meralyn H. Goode. David was a golf professional from 1966 – 1999, a member of the PGA, was an assistant professional at Hidden Valley and Roanoke Country Clubs, a Pro-Manager at Bedford Country Club, Giles Country Club in Pearisburg and Castle Rock Golf Course in Pembroke. After retiring from golf, he was employed as an insurance agent with New River Valley Insurance in Pulaski, was a member of the First United Methodist Church in Pearisburg and was a member of the Pearisburg Lion Club. He is survived by one daughter, Dana H. Ruble and husband Yancey of Roanoke, two sons, David Troy Hazelwood and wife Holly of Christiansburg, Danny R. Hazelwood and wife Sherry of Blacksburg, two brothers, Steve Hazelwood and wife Nancy of Galax, Mark R. Hazelwood of Richmond, one sister, Connie H. Lowe of Gahanna, OH and ten grandchildren: Brian Lawson, Andrea Lawson, Alexandria Lawson, Nicholas Ruble, Sebastian Ruble, Brianna Hazelwood, Mark Gregory, Savannah Hazelwood, Makaya Hagan, Mia Hazelwood and one great grandchild, Maggie Lawson. Memorial services will be held Tuesday, April 15, 2014 at 11 am at the First United Methodist Church in Pearisburg with the Rev. Dr. Brian Burch officiating. The family will receive friends at the church one hour before the service. Memorial donations may be made to the Pearisburg Lions Club, P. O. Box 452, Pearisburg, VA 24134. Online condolences can be sent to the family at givensfuneralhome.com.