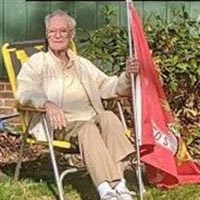 Theodore Reginald Hayman went home to be with his Lord and Savior on October 24, 2020. He was born on March 31, 1924 in Greenwich, Connecticut and spent his early years attending to the needs of his family’s flower growing operation in New Baltimore, Michigan.

At the onset of WWII he enlisted into the United States Navy in September of 1942. As a corpsman, chief petty officer, 3rd class, he was assigned to B Company, 2nd Tank Battalion, 2nd Marine division, and served in the South Pacific. He participated in assault landings on Tarawa Atoll as well as Saipan and Tinian Islands in the Marianas. He had left Michigan as a teen of 18 years old and returned to Michigan as a combat veteran on his 21st birthday!

Ted was re-assigned to the base hospital at Naval Air Station, Grosse Ille, Michigan where he met his girlfriend for life, Georgianna. They married on September 1, 1945. Georgianna preceded Ted in death last May. They celebrated 73 years of earthly marriage and now are re-united for eternity!

After serving his country, Ted like many other WWII vets, was focused on getting an education, establishing a career, and raising a family. He received BS degrees in Industrial Engineering (1949) and Chemical Engineering (1953) from Lawrence Technological University, Michigan. During this period of time, in 1952, he was recalled to active US Navy service for the Korean War and was assigned to Patuxent Naval Air Station, Maryland. He was officially discharged from the United States Navy in 1953 and returned to civilian life in Michigan where he continued his education, receiving an MBA from the University of Michigan in 1958. Over this very busy period of time he and Georginna also were raising five children!

His education led him to follow a career path in manufacturing. Over his working years he held various engineering and managerial positions and was employed by Wyandotte Chemicals, Medusa Portland Cement, Riverton Cement, Gold Bond Building Products, and National Gypsum.

In remembrance of Theodore, please consider a donation in his honor to Blacksburg United Methodist Church, 111 Church street, Blacksburg, Virginia 24060.

A private family service will be held at a later date.