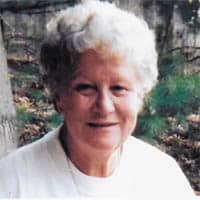 Georgianna Marie Hayman, of Blacksburg, passed away on May 16, 2019. She was an only child, born in Detroit, Michigan and spent her early years living in nearby Farmington. During WW II, she was a telephone operator. Georgianna met Ted Hayman, a returning sailor from the Second Marine Division, Pacific War Zone. The meeting occurred on Memorial Day, 1945 and they married on September 1, 1945. The Japanese surrendered on September 2,1945. Seventy- three years of marriage resulted.

Georgianna became the housewife, raising five children: Gayle, Ted, Kristy, Peter and Janet. Her life anchored her Christian faith. The family moved eleven times across six states. Georgianna, with her sweet personality, settled in each location quickly, befriending the new neighbors. Finally, settling in Blacksburg,Virginia, she became long time member of the Blacksburg Methodist Church and a lifetime member of the Tops Program.

In her last twenty years, she made Indian Creek Resort, Fort Myers Beach, Florida her winter home and had many friends there. Georgianna’s family grew to ten grandchildren and fourteen great-grandchildren. The overwhelming thrill for her was loving her grandchildren. We know she will be watching them grow up from her heavenly home.