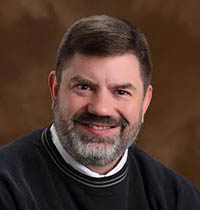 Dr. Vernon Russell Hayes, Jr., 50, of Pulaski, Virginia, went to be with the Lord on June 16, 2016. He died peacefully at home after battling cancer for several months. He was born January 21, 1966, in Detroit, Michigan, the oldest child of Carol Marie O’Connor Hayes and Vernon Russell Hayes, Sr.

He is survived by his parents, his husband, Aaron Smith, and his sister, Beth Price married to John Price. He also leaves behind his four faithful rescue dogs, Teddy, Dwight, Serge and Maggie.

Vern loved politics. Active in the Republican party almost his entire adult life, most recently he was elected Chairman of the Pulaski County Republican Committee. Before moving back to Virginia he served as the Campaign Chairman for Mitt Romney for President 2012 in Prince George’s County, MD. He received his Ph.D. in 1998 from Virginia Tech in Public Administration and Policy. He held two Masters degrees from Marshall University in Political Science (94) and Social Studies (95), and a graduate certificate in Homeland Security from UMUC. He was commissioned a Kentucky Colonel in 1987.

Above all other jobs, Vern enjoyed teaching the most, both in his time as a Master Professor for the American University of Kosovo and as an instructor at the University of Alabama at Birmingham and New River Community College. While living outside Washington, DC, he lobbied on behalf of small and medium forest landowners while also participating in local politics. His favorite hobbies were traveling the world, working with dog rescue groups and rooting for his beloved Detroit Tigers (he often reflected fondly on his time working at Tiger’s Stadium as a teenager).

There will be an opportunity for visitation with family and friends at Seagle Funeral Home in Pulaski, Virginia, on Monday, June 20 from 4 pm to 6 pm, immediately followed by a memorial service at 6pm. In lieu of flowers, the family asks that donations be made in Vern’s memory to the Mid-Atlantic Pug Rescue at www.midatlanticpugrescue.org. Online condolences may be sent to the family by visiting www.seaglefuneralhome.com Arrangements by Seagle Funeral Home, Pulaski.