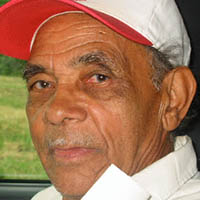 A WWII Vet and member of the Veterans of Foreign War, Bill served in the Navy where he was honorably discharged in 1946. Shortly thereafter, on December 19, 1946, he married Constance (Connie) Hayden at the United States Naval Academy in Annapolis, MD.

A resident of Floyd for most of his life, he served as one of the founders of Floyd’s first rescue squad where he went on to become Captain. As a community leader, he had many friends and family and devoted himself to raising his 6 daughters: Deborah, Marsha, Melinda, Natasha, Monica and Melissa who went on to marry John Helm, Greg Beatty, Johnny Walker, Ramon Stewart, Lewis Stuart and Christopher Bryant. Bill was married to the love of his life, Connie Hayden for 73 years.

A true leader, Bill took on many roles in the community where he was well-known and admired by many. He worked as a brick mason and bricked many homes in Floyd and the surrounding areas, worked at Maberry Funeral Home, served as the first Black Supervisor of Floyd County and President of the Floyd County NAACP, was an Elder at Mt. Zion Christian Church and was a 32 degree Shriner and Mason.

His friends and family will remember him for his calm demeanor, strong faith in God and love for his family. While we will all miss him dearly, we are in awe of the legacy he created and how it will live on through 14 grandchildren, 17 great grandchildren, 6 daughters, his wife and the many relatives and friends who loved him.

Due to COVID there will not be funeral services at this time. A memorial service in the Spring of 2021, to be determined.