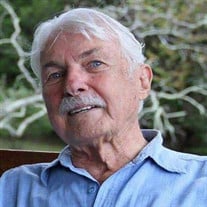 Kerry Lafonne Hay (Fonne), age 89, passed away at home on Wednesday, October 13. He was born February 3, 1932, on Backbone Ridge in Dickenson County, VA. He was the son of Willard & Willie Hay, with siblings Theta Artrip, Janice Patton, Mack Hay and Terry Gortney.

After graduating from Haysi High School, Kerry went into the Air Force (1949-1953) serving mostly in Japan. He enrolled in Virginia Polytechnic Institute and State University and completed his degree in Electrical Engineering in 1957. He worked at Poly-Scientific and Electro-Tec (both now part of Moog) in Blacksburg.

After retiring early, Kerry earned his auctioneer’s license and formed Hay Holler Auction Sales. He ran auctions in the Blacksburg area with the help of family and friends. Kerry and Sula created a record label, Hay Holler Records, specializing in bluegrass and old-time music.

Many, many summer weekends were spent at fiddlers’ conventions in southwest VA and northwest NC, camping with family and friends. Kerry was a great host at Hay Holler, the home he and Sula built in the late 70s. For almost 40 summers, friends and family gathered for a weekend of minestrone soup, sourdough bread, breakfast casseroles, roasted pig, slaw, baked potatoes, baked beans, desserts galore, biscuits and gravy, eggs and sausage, and best of all, a lot of picking way up into the early morning hours. He could often be found on the porch flatfooting with his children and grandchildren. During the past several years, he and Sula hosted a monthly porch (or kitchen) jam for the Blacksburg area old-time musician group.

The family would like to extend a special thank you to the Good Samaritan Hospice nurses and caregivers who have given extraordinary care to Kerry and the family during this time.

Please join us to celebrate the life of Kerry on Sunday, October 17, from 2-4pm at Hay Holler, Blacksburg, Virginia. Come and visit with family and friends. Bring your instrument and pick one more for Kerry.