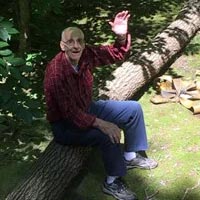 Ward McClure Hawthorne “Mac” born November 29, 1934 went to be with his heavenly father Wednesday October 30, 2019 after complications from surgery. Born in Washington County Virginia to the late Eugene Ward and Anna Virginia McClure Hawthorne, Mac is preceded in death by his beloved wife Louise and son James Ward Hawthorne.

Mac and Louise moved to Elliston Virginia after building a home for their retirement in 1985 and spent the last 34 years enjoying the peaceful setting of the country. Mac loved the Lord, his family and his trees. He was an amazing man and father who was always there for anyone in need and never asked for anything in return. He was a member of Seneca Baptist Church and enjoyed serving as a door greeter until Louise’s health prevented him from attending church on a regular basis. He will be greatly missed by his family and the community he lived in. We can only rest assured knowing that he will be in heaven with his family that has gone before him and he missed so much.

A memorial service will be held at Seneca Baptist Church November 9th, 2019 at 12:00 pm. In lieu of flowers we ask that donations be made to New River Valley Hospice who took such good care of his wife. He come to love them so much and a few staff members became like family to him.