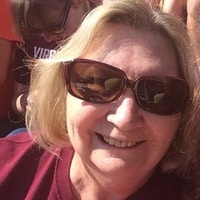 Janet Roark Hatfield passed away peacefully at her home in Radford on Friday, January 21, 2022, at the age of 79. Janet was born on November 1, 1942, in Ashland, Boyd County, Kentucky to her beloved parents Sterling and Eva Lena Roark (Arnett).

She attended Blacksburg High School, and attended Radford College. Janet married James (“Skip”) Franklin Hatfield on December 28, 1969. Janet and Skip made Radford their home in 1972, and it was there they raised their daughters.

Janet was preceded by death by her beloved parents, her loving husband, Skip, as well as her siblings Jo Leach, William “Jimmy” Roark, Jene Roark, and Judy Dowdy.

Janet was a strong and independent woman, and a mentor and guide to all. The most important thing to Janet was her family. She was also a dedicated Virginia Tech fan and greatly enjoyed being with good friends at her local bridge club. Education was incredibly important to Janet. Skip and Janet were responsible for the Hatfield Family Athletic Scholarship at Virginia Tech and were very proud to support Virginia Tech and its students. Janet was a longtime member of the local banking industry, retiring from both the former First National Bank of Christiansburg and First Bank & Trust.

The family will receive friends from 10 a.m. until 12 p.m. on Monday, January 31, 2022 at the Mullins Funeral Home in Radford. Funeral services will begin at 12 p.m. with Pastor Greg Harrell officiating. Interment will follow in the Westview Cemetery in Blacksburg. The family requests everyone wear a mask.

In lieu of flowers, please make donations to either the Women’s Resource Center or the Radford/Fairlawn Daily Bread.

The Hatfield family is in the care of Mullins Funeral Home & Crematory in Radford. www.mullinsfuneralhome.com