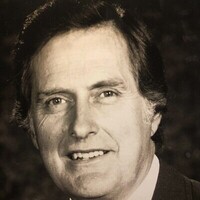 He was born on May 31, 1928 in Mann, West Virginia, moving to a farm in Montgomery County, Virginia in 1932. When he became 6 years of age, he had the opportunity to attend 3 schools, one in Childress, one in Dry Valley, and one in Bethel, all 2 miles from our home and all one room school houses. Since there was no bus transportation, and very poor dirt roads, it was necessary to walk. He attended the Dry Valley school his first year, which was 2 miles across the fields each way. He learned to fight early as his mother sent him to school dressed in knickers while all the other kids were dressed in bib overalls. He attended Auburn High School in Riner, still having to walk 2 miles to catch the school bus. He and his brother had the job of milking 30 cows by hand each morning and each night. When his brother became 16, he joined the Navy leaving George with the total responsibility for milking the 30 cows, take the milk to the road in 10 gallon cans on a horse drawn sled, before walking 2 miles to catch the school bus. He missed the bus a lot and would walk an additional 5 miles to school.

In 1945, George graduated Auburn High School in Riner, with 12 other students, and that same year entered the service and was sent to Fairbanks, Alaska with the Air Corps. While there he passed a test that would have allowed him to apply for admission to West Point but decided to pass the opportunity and to return home to Virginia. Upon returning home, he enrolled at National Business College in Roanoke, where he majored in Business and Accounting.

After college, he operated a service station, managed a Texaco Oil Distributing Business, and owned and operated a used car dealership. In 1957, he became a General Motors Chevrolet dealer along with a partner, Ward Teel, in Christiansburg. In 1958, he purchased the local Oldsmobile dealership and merged it with a Chevrolet franchise. In December 1959, he purchased the Chevrolet-Oldsmobile-Cadillac franchise in Radford. In 1972, he built a new 50,000 square foot facility, which is the current location of the dealership. In 1989, he purchased the local Pontiac-Buick dealership and merged it with his other three franchises. He was very proud of how the dealership has grown, and how he was able to give back to all his wonderful employees thru retirement and profit-sharing plans. He always said, “For me, business is fun and easy, just treat people the way you want to be treated yourself and the business will take care of itself. Recognize when people are doing a good job and counsel them when they aren’t.” The Dealership celebrated 60 years of business in December of 2019.

George has always been involved in the community, both personally and business related. In the past, he was president of the Chamber of Commerce and Vice President of First & Merchants National Bank in Radford (now Suntrust). He served as the chairman of the Business and Economics Department for Radford University with the intent of installing a certified School of Business, which we successfully accomplished. He also served as the Chairman of the Board at Radford Community Hospital and won a National Time Dealer award in 1989. He was also past president of the New River Dealers Association, Kiwanis Club and Retail Merchants Association; past chairman of United Fund and the Michelle “Petie” Lineberry Heart Recipient Fund Drive; past vice president of the Southwest Virginia Health Services; board member of the Virginia automobile Dealers Association, the Commonwealth Dealers Life Insurance Association, and Saint Albans Psychiatric Hospital; and Elder and member of The Presbyterian Church of Radford. He received the 1989 Time Magazine Top 10 Quality Dealer Award in the USA and a wing of the Radford University Waldron College of Health and Human Sciences Building was named The George M. Harvey, Sr. Center of Health Resources.

When George wasn’t working, he enjoyed hunting grouse, pheasant, quail and turkey. He loved the almost yearly (over 45 years) hunting trips to Platt, South Dakota, where he and his sons and several friends would be welcomed by the Wiens Family. There they enjoyed great hunting, good food and the wonderful hospitality of the Wiens. He also enjoyed playing golf and tennis.

Due to COVID restrictions, a memorial service and celebration of Mr. Harvey’s life will be held at a later date.

In lieu of flowers, please consider contributions to the American Cancer Society.