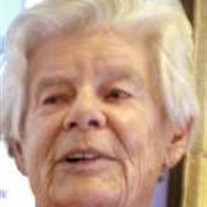 Sarah Helen Hicks Hartnett, 83, of Blacksburg, Va. went to be with the Lord on Monday, August 21, 2006. She passed away at Montgomery Regional Hospital after a brief illness.

Ms. Hartnett was a member of the Gateway Baptist Church in Blacksburg. Through her church and love for the Lord, she demonstrated her commitment to serve those who were less fortunate and help those who could not help themselves.

Sarah took part in reading programs at Shawsville, Kipps and Bellview Elementary Schools using pets to encourage students to improve their reading skills. She and her Bischon “Cassie” would also visit local nursing homes and care facilities brightening the day for both the staff and clients.

Sarah and her two sisters, Mildred and Gladys, were raised as orphans in the Miller Orphanage for Girls in Lynchburg. She overcame polio and paralysis as a child and went on to graduate from Ferrum College where she was elected to numerous honorary positions.

She was the daughter of the late Walter Millner Hicks and Helen Stewart Hicks and the widow of Edward Hartnett. Besides her parents and husband, she was preceded in death by two sisters, Mildred Spillers and Gladys Aguiar.

She had three special great-nephews Jordan, Joshua and Nicholas Spillers and their father, Joe Spillers, who thought the world of their “Great” Aunt. Also surviving are several nieces and nephews and two half-sisters, Annie Reynolds and Margaret Mantiply of Lynchburg. The community Sarah so passionately served was her extended family.

There will be a memorial service for Sarah at 10 a.m. on Saturday, September 9, 2006 at Gateway Baptist Church in Blacksburg. In lieu of flowers the family requests that memorial contributions be made to Animal Hope Alliance, P. O. Box 237, Blacksburg, Va. 24063 or the charity of your choice. The Hartnett Family is being served by Horne Funeral & Cremation Service, (540-382-2612). Online condolences may be sent to www.hornefuneralservice.com.